Artist Brian Tolle’s Eureka, is reminiscent of the slender gabled “canal houses” of 18th century New York, that were the vestiges of 40 years of Dutch rule. Tolle named his 40-foot-high sculptural Dutch façade, for Archimedes, the brilliant Greek polymath.

After discovering the upward pressure on a submerged object called buoyant force, Archimedes ran through the streets of Syracuse, Sicily, shouting, “Eureka! Eureka!” or “I found it!” I found it!”

First exhibited in Jan Hoet’s Over the Edges exhibition in Ghent, Belgium, the sculpture does not recreate the façade of a canal house itself; rather it is the façade’s rippled reflection in the flowing waterway. Its display in Federal Hall is intended to evoke a reflecting hall of mirrors, that suggests this site’s architectural and political history.

See the original Flushing Remonstrance for one week only, June 27 to July 2!

Tolle’s Eureka, is paired with a rarely displayed document of American freedom—the Flushing Remonstrance. On view in Manhattan for the first time in three decades, the Remonstrance, a petition to the Dutch West India Company, for “liberty of conscience” was signed in 1657 by 31 residents of the town of Flushing — which became Queens, New York. 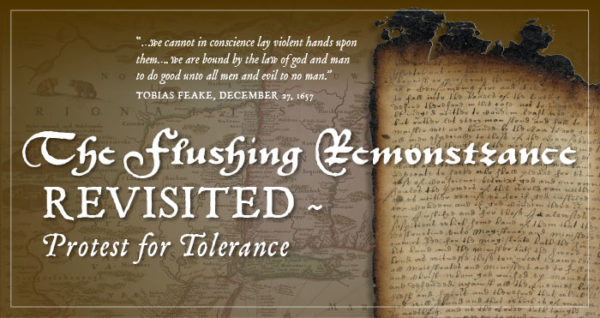 Learn more about the Flushing Remonstrance in this online exhibit by the New York State Archives Partnership Trust.